In November 2014, most of us were busy watching Interstellar, and showering praises on the movie like no other. Yes, I have given the movie a very positive opinion too, but what that it brought me was a return to the past, to another movie which I watched years ago. It was not Pandorum, even though it had the protagonists going to populate another planet a long way away from Earth. It was Event Horizon, one of my favourite science fiction horror movies of all times, and undoubtedly the best of space horror.

Released in 1997, I would like to believe that this movie was far ahead of the audience (and also the confused critics) of that time, and that should be the major reason why it wasn’t a hit or could go on to become a much talked about movie at that time despite its interesting ideas. It is in my long list of favourite space movies along with Pandorum which I mentioned earlier. This movie is also supposed to have inspired the video game series Dead Space, up-to an extent, and that is one of the most impressive scary atmospheres ever in a video game based on space. 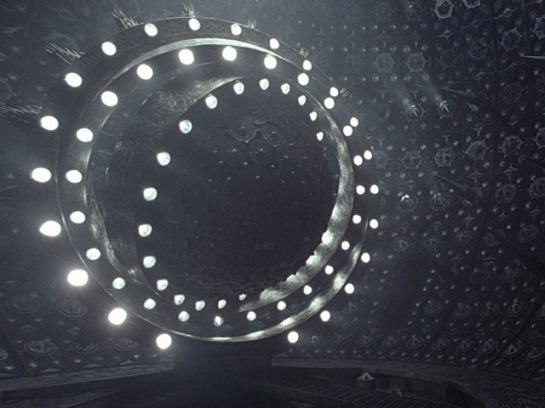 Event Horizon: There is more to the spaceship that you can find with your naked eyes.

With the last game of that franchise released in 2013 as Dead Space 3, what we should have is a sequel to Event Horizon. Why I am highly in support of the same is because of its idea – it is the story of a spaceship known as Event Horizon which possessed a special, experimental gravity drive in its core. The special ability was that it could generate an artificial black hole and use its extreme gravitational power to bring two points in space-time together, highly decreasing the time taken for the ship to travel through great distances.

The result of the journey of this ship is that it doesn’t just go where it was intended to go. It travels to more than just one star. It travels to another dimension, something of pure, unadulterated chaos belonging to spiritual and physical annihilation of the worst kind. There is the message given “liberate tuteme ex inferis” (save yourself from hell), but this journey to another dimension which can be equated with inferno or hell means only one thing – death and destruction; that brings another Faustian situation here – something not limited to personal devastation.

Pandorum is not far behind in this idea and the horror of deep space. As I had watched Event Horizon as well as Pandorum, Interstellar had a much lesser effect on me. A number of ideas were already there with me, along with the different worlds of the game, Mass Effect. The existence of the humanoids go back to my thoughts about Prometheus, and for me, Interstellar was more of a combination of all these movies and games with the addition of a few unnecessary things, but still enjoyable as the space movie.

Pandorum: As Earth finishes its time, you have to travel to another planet, but how easy is it?

The idea of how wormholes work, the existence of other advanced humanoids in the outer space, the exploration of other worlds, the astronaut who lose the mind after staying alone in hostile atmosphere for too long, the arriving end of our planet, the properties of another planet or world – none of this is new to me, and therefore considering Interstellar as one of its kind (as I have found on some forums) is lame. Interstellar has something or the other common with the lesser successful movies and video games, and therefore the innovation needed was so less.

As Event Horizon is a masterpiece in space horror, Interstellar has managed to be the same in something else; it is like a pure science lesson which is less applicable to everyone – the skill is in adding a lot of unnecessary science classes to the work and making it less interesting for the common man. Before you watch Interstellar, you need to watch Event Horizon, Pandorum and Prometheus, plus play the two video games, Mass Effect and Dead Space. Thus you can have some Interstellar before having that flick, or rather end up watching a highly indirect prequel to it.

***The images used on this blog post are screenshots from the movies Event Horizon and Pandorum.