***This is going to be quite a strange post about my thoughts on expanding the vampire universe which has been part of my writing for quite some time – lead by Uncle Dracula, Vampire Bat, Vampire Owl and Vampire Crocodile along with the other vampire team having guest appearances from werewolves, zombies, mutants and many others. I do feel that these characters and incidents could actually have a working base. So, if you feel weird already, you can skip this post.

I have been using the vampire world for the stories of this blog for quite a long time. I have been thinking about the same and realized that I had thought about a good number of creatures and lands, some of which I have already mentioned in the previous posts. This made me wonder if I could actually make a world out of those which I have already talked about in the previous posts.

So, I decided to divide the creatures into territories on a world map which I had tampered with, and gave each of them land according to what I have been thinking about. For the same, I thought about what I wanted, and realized that it was more of a balance of power. I checked which all creatures could ally with which kind, and made the territory division on that basis, making sure that there could be some alliance which can make the balance back to the continent.

I have filled the map with creatures which could rather be neutral or evil, rather than be on the good side as far as alignment is concerned. I have added three kinds of elves to make sure that each could take the side of their own race or according to how dark their alignment is. The witches, immortals and spirits of nature were added to make things more twisted with further scope for unholy alliances.

The zombie territories are divided too, as they are certified mindless and mostly remains without an alliance even though Lich Queen has a specific amount of control over them, more than the Vampire Lords have. Anything related to the ghosts is also a possibility of another empire even though the control of the Lich Queen as well as Dracula will always be there. The Goblins and the Orcs can work together if needed.

The Newborns, Highlanders and Nomads are added to bring another level of opportunity to the whole thing, as they are more neutral than anybody else in their approach. The Other World and the Shadow Grounds have the portals to the other dimensions. The former is a direct entry to the world of the demons which has been closed, and the latter passes one though the shadow realm which is an intermediate world which goes to many places. Then there is also the details about the vampire division in particular. 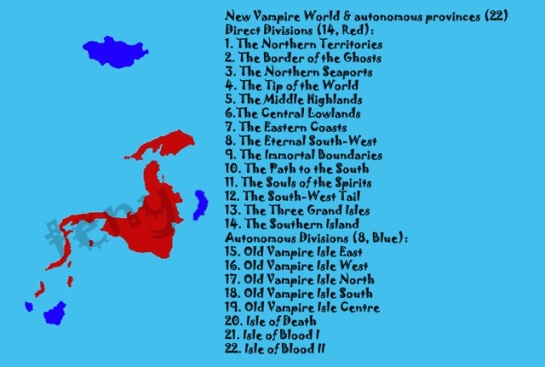 To add to it, you have the Eldars, an ancient but advanced race, Necrons who are the most advanced of the undead, the Mutants, the Sirens and the Cyclops to add enough fury here. Draconian Reptile Order and Dark Warlords will keep thing interesting with their desire for war. Satyrs and Centaurs will also play a big role in a possible war or peace, whichever comes to the continent. There is also a lighter side to this whole continent which is not shown, and there, the races would include a team lead by the Halflings. But right now, the focus is on this world, that of darkness which has the vampire team on one end. The biggest inspiration for the same came from two computer games, Age of Wonders and Warhammer 40000: Dawn of War with their sequels.

There was a belief among the vampires which was deeply rooted in tradition. It was about true love, something which was not a common thing among the vampire community, as they had witnessed too much of fake love among the humanity through the ages, and had still survived to continue their eternal existence. The Vampire Bat was never a strong believer of legends, but he was a traveler and an explorer, and do you know what that belief is?

It was said and written in golden letters in the Great Chambers of the Vampires, that “One who travels to the edge of the world and take a leap of faith shall find true love”. The writing glowed at night when the moonlight fell on it. This story comes from a time when Earth was not declared spherical. But the fact remained that no vampire had ever traveled to the edge of the world. No, not even Uncle Dracula or his former vampire assistants who were teleported to the other dimension.

Vampire Bat took that journey to the edge of the world. With the blessings of Uncle Dracula, he started on that journey which had nothing certain about it. It was a journey based on faith. He passed through the graveyard where the zombies stared at him in disbelief as they came to know about his quest, which didn’t really work that well inside their brains. They told him that the only true love is with edible brains.

Vampire Bat passed through the werewolf lands, who seemed to have a little more optimism about the same, but they didn’t hesitate to tell him their opinions. The leader of the pack told him that true love is attained only by death, and it is too rare in life. If you take a silver bullet to the heart for someone else, it is true love and in the heaven among the stars, you are going to be united with your lady love; said the leader wolf.

The centaurs had another idea. “Take this bow and arrow” said the centaur chieftain. “After you aim at the stars, turn back. If the arrow comes back to you, there is true love and you can take the leap of faith” he added. “But won’t I be dead if the arrow comes back to me when I am not looking?” asked the Vampire Bat. “Good point. It is better to take the leap of faith without thinking then” the centaur agreed.

A leprechaun was singing a song as he reached the rainbow’s end. It was a story of unrequited love in verse and the trees danced to his tunes. It stopped the Vampire Bat and made him think what if it was not the right thing to do and that there was no real point. But he continued anyway, as he knew that this was no longer his journey to stop. It was only half his journey and the rest belonged to his soul-mate.

The journey was tedious, but the Vampire Bat stood strong at the edge of the world. The wind was strong there and the sun was all prepared to hide behind the mountains far away. He took a leap of faith from the top of that cliff with the clear knowledge that he can’t fly. The fairy who looked at him from a distance screamed suicide and the unicorns just ran away scared, but the Vampire Bat knew better, or didn’t he?

***The images used in this blog post are screenshots from the time spent in one of my favourite games, Age of Wonders: Shadow Magic.