On this beautiful Friday the 13th, I was depressed in the absence of no horror movies being released. I just ended up watching a Malayalam movie, a thriller (https://moviesofthesoul.wordpress.com/2015/02/13/saaradhi). So I am choosing to go after some horror from my memories and bring back a few bad guys to life. No, Uncle Dracula will not be on the list because he was never a real bad person. Here are some of the villains of great horror from my favourite slasher movies. This time, I choose the psycho killers and make them better known.

Jason Voorhees (Friday the 13th): This lovely killer from Friday the 13th series needs a mention on every 13th Friday that you have in an year. Having a machete in his hands and murdering people at will, he was a grand character in the 1980s and 1990s only to come back to us with a reboot in 2009. The movie does exactly what it was supposed to do, and it is time Jason come back to us with another sequel. That one even had Julianna Guill who could be one of the best scream queens. Even if the movie name is forgotten, you might not forget his mask which has become the serial killer face that makes the most impact.

Jason needs something for his machete. After all, this is Friday 13th season.

Rusty Nail (Joy Ride): This part-time trucker and more of a serial killer comes from the three movies of the Joy Ride franchise. I like that name – it has something about that draws interest towards him. His face rarely has any chance to come near the camera, and the horror is drawn from the huge truck and his method of operations. Even as the first movie had a better cast, I would prefer the second – the third is not bad either. Rusty Nail in a truck might also be the smarter one around and will make sure that your love for Optimus Prime won’t be that much from admiration or respect.

Freddy Krueger (A Nightmare on Elm Street): Here is a villain who had me scared during my childhood. I remember it to be scarier at that time. Among all the killers here, he has that nice, scary supernatural side that work so well. He rules the dream world and in invincible there. He comes in your dreams and kill you, so there we see that reason for not falling asleep. All your fears come alive in his world as this burnt face and bladed gloves are sure to provide some nightmares and questions your decision to go to sleep. The last movie of the franchise did no justice to the villain though. 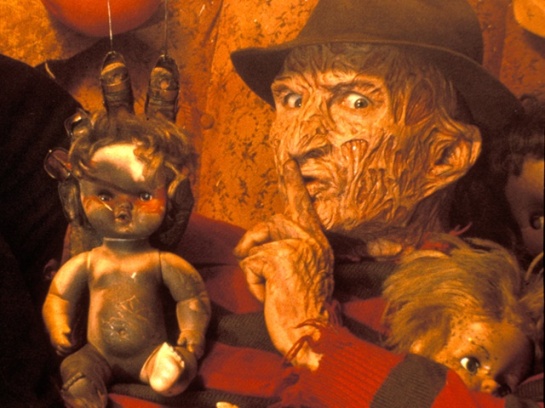 Be silent in your dreams. Freddy doesn’t like to be disturbed in his world.

Harry Warden (My Bloody Valentine): The imagery of the miner armed with pickaxe is a nice one, especially when there is that mask bein worn. The remake of the original, My Bloody Valentine 3D which came in 2009 carries the legacy of the killer. There are some nice moments of thrill and gore in the new version too which can establish this killer in your list of villains. This really matches the situation of having Friday the 13th and Valentine’s Day so close to each other, right? You might need to find a mine or a town near a mine to have that special feeling of having this killer though 😛

ChromeSkull (Laid to Rest): I first thought Michael Myers (Halloween) or Victor Crowley (Hatchet) would have been the right choices, but then replaced him with this one. A less known killer here, but he can still be a nice choice for your Halloween or Friday the 13th – even the name is so interesting, isn’t it? It is time this one gets his due as he has been ignored for too long. Moving around and murdering people, sending the video tapes of the murders to the authorities, ChromeSkull is one strange and lethal killer to bring the horror.

So, it is the Valentine’s Day that comes after Friday the 13th. It might sound strange to some people, but not for me, as I don’t find too much difference between the two. My Bloody Valentine is the movie which you can watch on both days. There will always be something common between romance and love – this closeness is the sign of that common thing being even more common this year. This should be a bloody valentine’s day indeed 😀 Even if you don’t need any of these people of the gore, there is always Hannibal 😉 ***The images used in this blog post are from the official Facebook pages of Friday the 13th and A Nightmare on Elm Street.