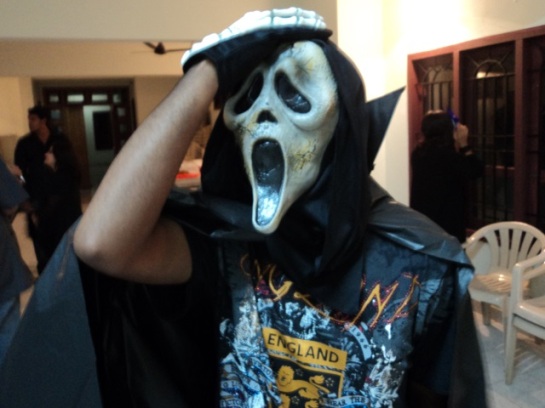 Vampire Owl: Why are we wearing the Halloween costumes? We are the vampire team and should automatically scary to the humans in our true forms.

Vampire Bat: It is how things should be. If we are not wearing those masks, this is no Halloween at all. Even Uncle Dracula is wearing a mask for this occasion. It is a human mask, and he has promised to shock us.

Vampire Owl: Shock is no enemy of the oldest of the vampire-kind. Wait! Is that the Vampire Crocodile? What a vicious mask he is wearing. It looks like taken right from a giant dangerous rat which can devour us all.

Vampire Bat: It is a mask of Jerry from the legendary cartoon of those humans which they call Tom and Jerry.

Vampire Owl: Well, it surely worked for me while staying inside the Halloween terms and conditions. The Jerry Mask should be made a compulsory part of each and every Halloween of these lands.

Vampire Crocodile: I have always been depressed by the evil deeds that the devilish mouse commit on the poor cat Tom. Even the Vampire Cat has acknowledged the same.

Vampire Bat: The second property, the mask of evil is acknowledged then. Let them be evil as well as scary.

Vampire Owl: I demand party after this.

Vampire Bat: The party is where there is the need for hope. We are doing this for charity. The finishing line is at two places, one at the nearby orphanage and the other at the home for the aged and the infirm run by the Sisters of the Destitute.

Vampire Crocodile: So, what is the plan?

Vampire Bat: We go to a door, knock on it, collect the money if given, or may be some old clothes, keep repeating the same, and take what we collect to the orphanage or the old age home. It is as simple as that. Uncle Dracula will come and lead the way.

Vampire Owl: Yes, we are like the cool vampire people doing some good things unlike the normal human beings.

Vampire Crocodile: Yes, it is cool. The others including the Vampire Cat, Vampire Alligator, Vampire Hamster, Vampire Crow, Vampire Raven and new apprentices will join, along with three werewolves from the Land of Anger. Lich Queen has also offered us two zombies from her kitchen team.

Vampire Bat: This has the goodness factor, and you are also going to enjoy these moments.

Vampire Owl: I had and still have that feeling that this was going to be awesome!

I have been tagged by Maniparna to take part in the Five Photos Five Stories (FPFS) challenge. This challenge works like: You post pictures for five consecutive days (with possible discounts like sometimes changing to alternate days :D) and attach posts to it, fiction, poem or short write-up. It can be anything that suits your taste. I am also tagging my wonderful blogger friend, Tara on Day Four, as part of the challenge, and I will tag a new person on Day Five.

***This writing is based on our own Halloween programme which was conducted on the Sunday closest to the October 31st in the years 2010 and 2011 bringing something innovative and inspiring hope. It was a voluntary charity drive organized by our youth club with permission from the residents association, and result was excellent. It had clearly exceeded our expectations. It happened only for two years as the club itself had ceased to exist because of people getting jobs further away and a few others getting married. May be it shouldn’t have stopped, but a continuation was never in my power even though I was the club secretary. We needed members, but there were not enough.

***The image used in this blog post is also part of the pre-programme preparations, taken on my Sony Cybershot DSC-W310. The Ghostface mask from the movie Scream is my own special mask for the programme, and the rest included Werewolves, Vampires, Zombies and a number of others including my personal favourites, the Hellboy and the Wolf-man. It was a programme from the youth, and so even in the absence of masks, we managed with all the horror that we could come up with 😀 May be you can try this some day – there will be people who won’t like this, but they are sure to be in a minority 😉

It is that time of the year again, and the period of Halloween, a night which has kept me happier than most of the other night. This is that celebration, which even if not at all popular in this part of the world and not even heard about among the people of our locality, had a lot in store for us. Halloween did turn into something special in 2010, but it remained so only for just another year, and 2011 ended the same.

It was after my visit to the United Kingdom in 2010 that this celebration got going. Thanks to my cousin in England, I was able to get a few Halloween special items as the night neared. But I had to cut short my visit and return to India as my grandfather had expired. Soon, I returned with what all scary or almost scary things I had brought from the place. After a few days passed and there were only a few days to Halloween, I wondered what was the use of the costumes.

Our notices before the first & the second Halloween.

We had a group for the youth at that time, and more than a month had passed after the last meeting – I was for some odd reason the secretary of the group and decided to hold a meeting, in which I asked the same about the possible celebrations. There was not really a response in the beginning, but later we felt that may be it could be possible, not without doubts, but still there is hope.

The major arguments against the celebration were that
I. Nobody is aware of such a celebration and doesn’t care at all.
II. People will get scared and might even complain.
III. Some people might misunderstand the evil masks.
IV. We don’t conduct celebrations, only the elder’s group do.
V. We have absolutely no decision making power.

But then we decided to give it a twist. I had read about the Halloween related fund raising programs for UNICEF which had raised a huge amount of money. It is really a nice idea, I have to say; for Halloween isn’t usually considered in a positive light, and this changes a lot: http://www.unicefusa.org/mission/usa/trick-or-treat. See what they say about the same “began in 1950 as a way to help kids who need more than candy”. Notice the tagline: IT’S SCARY HOW MUCH GOOD YOU CAN DO!

We thought, may be we could do something good with our group along with celebrating Halloween all at the same time. It was from this idea that we come up with the plan to give a detailed proposal to the association and get the permission to conduct the same. We printed notices and distributed them in each and every home to make sure that they will be ready when we arrived. We rented a few more masks from the shops to make sure that all our members were included.

Before unleashing the monsters…

We mentioned in the notice that we would take donations as well as the old clothes. Even as there were two or three homes which didn’t open the door or didn’t contribute, and even though a number of people were not at home, we did collect around five thousand rupees for the night along with a lot of old clothes, which we could take to the nearby children’s home and the home for the aged. Unfortunately, the same couldn’t go on for more than two years, due to the lack of volunteers and the absence of interest.

It is fun, and a satisfying thing to do. Unfortunately, our club did cease to exist.

How not to steal Halloween sweets! 😀