ISL seems to have begun and ended so early, and we are left wondering what is to do with that time period between six fourty five and nine before sleep. There is an emptiness there, and this absence has basically become a presence, a bloody spiritual presence of something that calls for thinking about the league more and more, especially when sitting with nothing to do. It has finished in style, but we are still left with some memories, especially of the final. The rest have already been taken and locked up.

As I had said earlier in my post (https://theteacerebration.wordpress.com/2014/12/20/indian-football/), this is a final in which both results had the power to make me happy. It was exactly what was delivered on the night. Looking at the sad face of Sourav Ganguly was going to be depressing, and I wondered about a possibility of both teams winning, as Apoula Edel became that mountain that Michael Chopra couldn’t overcome. As I have mentioned much earlier, three of my four suggested teams for the semi-finals also made it to the top four and my favourite two teams were playing the final (https://theteacerebration.wordpress.com/2014/10/01/a-change-or-no-change/). 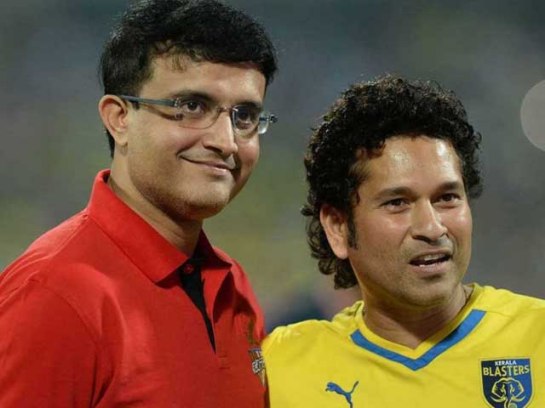 The legend of these two cricketers never ends – the best opening pair in cricket, ever.

I have been a Sourav Ganguly supporter throughout my life. In cricket, his dedication and passion was not rewarded well enough in the last stages of his career, and IPL didn’t give him his due either, as there was only money that mattered there. This year, with ISL coming to the picture, I wondered how it was to turn out, and in the end, as everything seemed to finish off well, that was another case of things becoming fair – as this is the Lord of the Off Side and Prince of Kolkata who brought to us the first team in ISL and had the first big collaboration with the Spanish football giants Atletico Madrid, with all the celebrities at the opposition camp on the day of the final.

There is nothing that Dada hasn’t done for Indian cricket, and there had to be another day on which he had to be on the screen, happy and with his arms raised high in victory, and it was that day. It was the day of the warrior, once again. Even if it is on the stage of other game, the wrongs have to be undone, and Sachin Tendulkar won’t mind, I am sure – he would be supporting good football, especially after watching the match from Chennaiyin. After all, this is a league which is not owned by any organization like BCCI, and Atletico de Kolkata played and won with the right spirit.

Another fact is that Kolkata deserved the win, coming back with the confidence which they had lost with a loss supported by a disallowed goal which should have been there. They had dominated the league and was at the top for most of the season, and in the end, they also finish first in the league with the final win – sounds fair. Then there is Iain Hume winning the Hero of the League, and Sandesh Jhingan also getting his deserved award. Kerala Blasters, you can be proud. There were still people who didn’t want both these teams in the final, and this match is a slap on their faces. Dadagiri can never be destroyed, and Sachin Tendulkar is forever.

The game had some good moments, and it is the happiness of having two of these teams and not any other in the final. Kerala Blasters can be happy about having reached this stage after being considered one of the worst teams in the league. David James can be delighted about coming this far. More than anything else, they also lost more to a fantastic performance from Apoula Edel, a goal keeper who became the wall. There is also the award won for the best fans, and that is much deserved. My only sadness is that Kerala Blasters didn’t play Pedro Gusmao and Sushant Mathew enough. 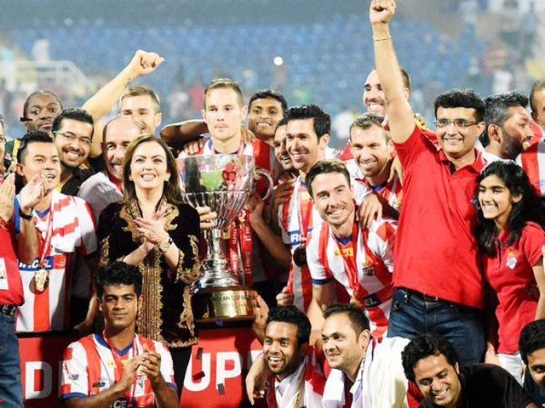 The winners of the match, trophy and the soul, with Dada, Mrs. Ambani and the others.

Lets thank Nita Ambani, Star Sports and the rest of the sponsors and people involved for bringing this tournament to a success as it has turned out to be, and lets wait for the next season. Meanwhile, lets appreciate the good things that have happened to the Indian football along with those waiting to happen, and a final which had two teams playing each other with mutual respect rather than trying cheap tricks or getting one sided decision from the referees for no reason. India is becoming a powerful force of soccer, and it is time cricket makes way for football, and tennis is also gaining in popularity, thanks to Roger Federer’s recent Delhi visit.

*Photos are from NDTV and Sportswiki (cropped).