*I would like to begin this post with a statutory warning which has been issued by Uncle Dracula in association with the whole vampire community and a message from Simona the Lionhearted. She asks everyone to wear your helmets during this Christmas, and not to drink too much that you might end up forgetting your helmet, as it is not too different from forgetting the significance of your head. Simona loves her helmet and prefers to save herself inside it, a lesson for all the humans to learn. Use your helmet, no matter what 😀

Simona likes helmets and chooses to save herself from those possible injuries. Do you? 😀

Now, what can I say about Christmas? I doubt its existence as the big thing that it used to be. It still exists for me because it needs to. There is the loss of power of celebration that I associate with a number of festivals, and I can do the same with Christmas. I haven’t really seen a Christmas carol for ages. But no, this is not a festival that you can let go that easily. Unlike the others, this one keeps coming back, and the best reason for the same may be the time of the festival. May be there should have been full power snow here – that should have worked a lot better.

Christmas has had its charms during the childhood days. There was Santa Claus, and there was hope; even as nobody really gave me the presents; none of those self-proclaimed loving uncles or aunties – not even the big cousin-brothers, when I have seen my dad giving to the relatives, and a lot of my friends receiving from their uncles. Nobody even gave me five rupees to buy black tea. But I still believed at that time, because others did receive, and I thought Santa Claus might give something to me directly.

Every year of not receiving anything, the level of that hope comes down. Now, we are left with the absence of Santa Claus as well as that hope. As it is said in the end of the movie, The Polar Express, “At one time most of my friends could hear the bell, but as years passed it fell silent for all of them. Even Sarah found one Christmas that she could no longer hear its sweet sound. Though I’ve grown old the bell still rings for me, as it does for all who truly believe”. 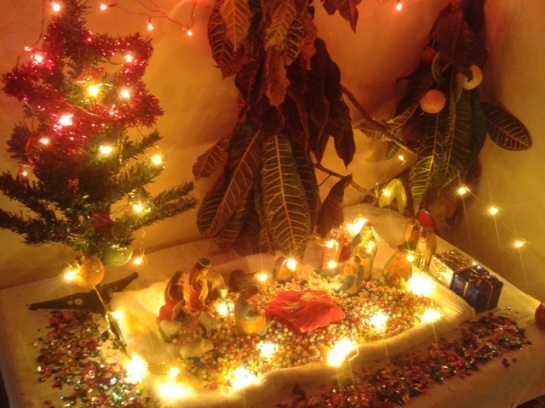 The Christmas Crib there – prepared it again after more than fifteen years for no reason.

We were all dreamers, but when we grow up and choose not to believe – I live in my doubts, created from the chaos that is in my mind. I have been that close to disbelief that I could never believe in anything anymore. Christmas had its magic, but it seems to be disappearing, just like all the traditions and those celebrations that we had. Who wants magic in the world of science, right? Who wants tradition when without it one can be free evil and do anything and everything? Then there are the saviours of traditions who rarely makes sense. There will always be non-believers who choose religion for material benefits.

We are left with people who celebrate the festivals for showing off, or for some random personal benefit. Everyone wishes to show the money power and the Merry Christmas is no longer merry. The only thing that comes with a certainty is its reverse, Remy Martin – people take this as another occasion to drink along with the hundreds that they have ever year, and it passes. Santa Claus gets stuck in the chimney with his reindeer sent to the slaughterhouse and nobody will care – thank God that Mahabali comes from the underworld; he only have to save himself from the pot-holes taking him back to his abode. We have gone on to become a selfish group of people, and every festival has gone on to reflect the same.

The star for Christmas – put it once again after a long time just because I could.

We have reduced faith in God and it has reflected in our love and care for people. The hatred that we see everyday is just too high. Some people think that it can be solved by converting people into one religion. They are as responsible for this as much as those without faith. We are being thrown into a world of mutual hatred, and it is getting only worse. Whatever happens, the fact remains that we are influenced by more than one religion in our life time, and we don’t belong to just one. Why would Santa want to come and receive the news about Peshawar? Why isn’t there the chance for every child to celebrate Christmas and get the presents? Isn’t there at least a chance for them to live?

We need all the customs and traditions, and we need each and every world religion with all those good things that they teach. The world needs all its beliefs because humanity was shaped by them. We need people to explore each of them, and understand the basic message of love. Lets do something good on this Christmas, and not publish it on Facebook. That would be a good idea. It will bring back a part of the magic of Christmas; lets give it to someone else who is in need. Lets do it irrespective of religion, and let no one take away our right to be good to people, not considering their backgrounds.

I shall keep my doubts, but all of you have a wonderful Christmas nevertheless 🙂

The decorations for the crib are from
I. Trinity Supermarket, Keezhilam
II. Pittappillil Stores, Kuruppampady
*Just mentioning because they proved effective and substantial in making the crib, something I did after a break of fifteen years or so.