Whenever we have travelled around Kerala in a car or on a two-wheeler, there was always the need for a place to have tea at regular intervals, and there was surely the need to have food. We couldn’t have food from here and there, because nobody can say for sure how good it is, especially by the quality. You might see the best looking restaurants, but there no guarantee about the quality, especially when wandering through those areas were there are no friends to recommend the best places.

The oldest memory that I ever had of a restaurant which still exists, goes back to the Indian Coffee House, even though that branch at Perumbavoor no longer exists, with another branch opening about eight kilometres from there instead. At that time, I used to say that I wanted to visit an Indian Coffee House, and any of those branches would do, because they were all the same, and there was quality. I had already visited every branch in Ernakulam district long before I was a teenager.

Indian Coffee House is spread all over Kerala, as it has the largest number of branches in the state. It has evolved into being the best choice of the Malayalis all around. It is fully owned by the employees of the restaurant chain as a co-operative society, with a committee elected for management. The biggest encouragement for starting this chain of restaurant goes to the popular communist leader of Kerala, A.K. Gopalan who was a leading social activist in the state. You can see his portrait at every branch of ICH.

With its fifty year anniversary celebrated in 2008, this group of restaurants having its headquarters at Thrissur has its most number of branches there itself, along with the same number at the capital city of Trivandrum. Considering the branches from Thrissur to Trivandrum, they have the same price everywhere. The northern version of Indian Coffee House from Palakkad to Kasargode is kind of different, even with the structure remaining the same. You can notice the difference on the logo itself. 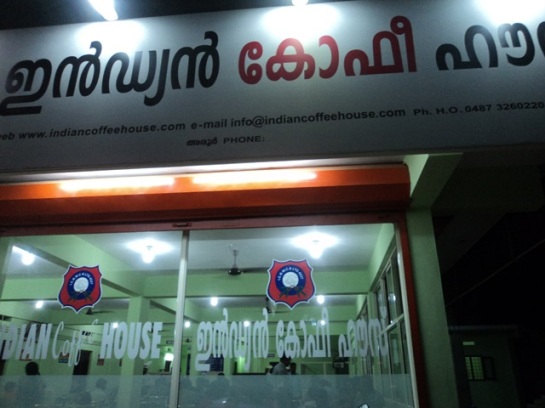 Even though the Indian Coffee House from Central Kerala to the South which covers eight of the fourteen districts has been more of the thing of concern for me, I have found the quality very good in both cases, as I have tried both. The Thrissur based ICH does have the Poori Masala factor available at all times, which was replaced by Idli, and that too only in the morning for the Northern based ICH. The choices were less in the latter case. For the former though, most of the things shown on the menu are available throughout the day.

Lets get back to the Thrissur based ICH completely which deals with the Travancore-Cochin area, and you can actually check the rates from their website itself. After it opened a branch at Aluva, it had become our regular place to have some tea. I was highly disappointed when the branch at Muvattupuzha was closed, and it is quite an addition to the earlier shock given by the closing of their restaurant at Perumbavoor. Well, now Perumbavoor surely needs one, but not at that earlier location which is too crowded.

I would say that the best branch opened is at the Angamaly Bus Station, which is a very nice choice of location, as the town now got three of them. I have the opinion that each and every bus station, railway station, theatre and mall should have one Indian Coffee House near enough. Also imagine having one near those pilgrim centres. They have the best people serving food in their trademark clothing, and having the fine quality food. With the low costs and tasting nice and exactly the same in each branch, ICH always scores.

***The images used in this blog post were taken during some of my visits to ICH.

With love for the ICH tea
TeNy