There are a few things that are difficult to change. Among them are the passion for cricket in the subcontinent and the worship of cricketers. This has always happened at the cost of the devastation of other sporting events. Cricket has almost annihilated all the other sports from India, and this struggle that the other sports seem to be putting up is just because they are working so well outside the subcontinent, and there are still some good people left in the country who choose to watch the rest.

The arguments for cricket are completely invalid. The first one is that Sania Mirza is also a big name even without winning anything huge – but it is a wrong argument, as she is popular just because of her looks, and it is disgusting to read how some people make comments about her. The next argument is that India is winning in cricket, and so it gets support. But no, the case is that Indian cricket team is winning because they have money and facilities, and also because nobody outside the subcontinent gives a damn about the game.

Let’s take the case of IPL. It has deteriorated into the worst level with its match-fixing scandals and other scams, with two of its teams already terminated and two or three almost getting terminated, with players banned and controversies coming up again and again. Even with all those fake entertainment stuff in it, they couldn’t even come with a story-line better than WWE, and it is a real shame. One actually has to wonder if there is any point in following a sport which only one nation actually plays and two or three nations make a half-hearted attempt to try.

Consider the evil that has IPL has turned cricket into, one has to wonder what ISL will do to Indian football. Indian Super League is certain to be better than that though, and can create a better Indian football team for the future, with the number of fans also increasing. It is a much needed thing to have a team for us to support in the FIFA World Cup – we can surely qualify from Asia in a few years or so. India will surely be a power to look out for in twenty years, I would guess. We should just keep the politics away from this one.

Unlike IPL, this league also have the teams from the right areas, as Kerala and the North East always deserved its teams even in cricket. It is good to have more balanced distribution of teams here. Among the teams, I can easily declare my support to Kerala Blasters ownder by Sachin Tendulkar and from my home state. Let’s only hope that people would not resort to abuse, as it is what Sachin fans have been resorting to – hope they will respect the opposition this time rather than going in the path of that terrible Malayalam movie 1983 which called for the abuse of all who don’t support Sachin Tendulkar.

Leaving the immortal cricketer’s team behind with its large number of Keralite football fans, my next support will be for Atlético de Kolkata, in the name of Sourav Ganguly, the greatest left handed batsman and the best captain India has ever produced, and also for the beautiful city of Kolkata, and hope that they can win if Kerala Blasters can’t. They also have my favourite logo in the league. Then I give my support to NorthEast United FC, as I hope that the beautiful North East will have all the attention that it deserves with this team. May be John Abraham can bring it there, and the actor’s commitment social work have always been things worth cheering for. 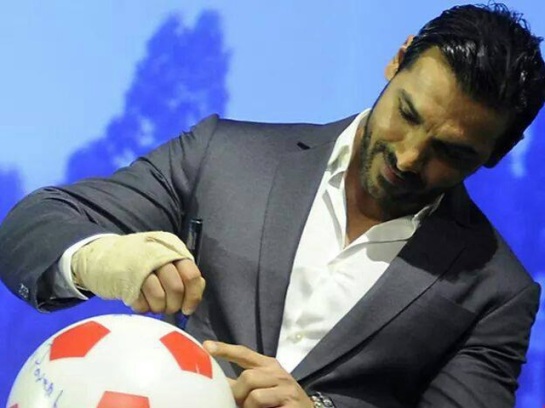 I shall leave a little love for Goa too, and about the rest of the cities which have had an IPL team for more than one season, I would care less. I hope that one of those cities, states or collection of states which haven’t had much of IPL action with them, shall go on to win ISL. More over, I hope that it will trigger the much needed resurrection of football in India, as it will surely bring hope for the other neglected sports, and end the dictatorship and evil ways of cricket. May the two great men of cricket Sachin Tendulkar and Sourav Ganguly bring it to soccer. I wish the league all success.