We all have our dreams; sometimes we keep them there, not wishing to get it out of that stage due to the high impossible nature, but there are those other dreams which we have no plan to keep there as dreams. We need to get hold of the second type, even though there are times when we are not really sure if they can actually go to the next stage. Maybe those related to competitive examinations and getting a better job can go on forever, but with those related to travel, we do have a certain amount of power to accomplish them.

There will always be the factors which try to keep us away though, and they might be stronger; still there will be a time when we just have to go. I have had mine, but I haven’t let them go, and I haven’t even tried to make them happen yet. I have my travelling list on hold right now, and I hope to keep reminding myself of the same, so that they don’t disappear right into one of those nightmares that I have during those darkest of nights. My dreams about travel go a long way back; and they are deep in those books, those belonging to the horror genre, beginning and ending with Bram Stoker’s Dracula, but not limited there.

Dracula and the rest of the Gothic: There is a certain call!

As I have told a good number of people already, the one dream related to travel, that I have had since my childhood days was to visit the Dracula Castle; not just to reach there, but to get to the destination after wandering through the Carpathian Mountains. I have read many other works which relates to the Gothic horror, located in places which are more appropriate to be called the “land of the dead”, but the Carpathians stayed, not just with the legend of the world’s best known vampire, but also with its natural beauty.

There are the locations which can make a normal person happy; that should include Paris being the City of Love, New York as the City of Skyscrapers, Rome known to be the Eternal City, and all those sobriquets that came with these – then there are the rest of the places in North America and Europe which should be second home to some of our relatives, the grand cities with huge shopping places in the Middle East, the places of pilgrimage, the frequently featured places of natural beauty and the rest which have made into news for one reason or the other.

Then there are those places, Singapore, Malaysia and Thailand – it is as if everyone wants to go to at least one of the three nations; most of my friends have, if I go back and read flashback memories of us talking; and I have also been to two of the three already. Then, we know which are those few cities around here that everyone visits frequently – those names are even better known to the crowd. But they won’t make it to my priority list, as I haven’t been in that usual “normal list” for a long time; for I have evolved enough to get my name darkened so much that no sign of it remains there. This means that I will have to travel alone? That would be my pleasure.

So, with the lack of existence in that list of people, I have managed to get into another list, and instead of those usually preferred trips, here is the journey to the historical Bran Castle to which the legend is associated, and it will have to be one trip through those beautiful lands. The imposing Corvin Castle and Poenari Castle, the two other castles which are also connected to the legend, will also require a visit, because the dream is never limited; it is something that is spread over all these. The great castles will have tales to tell, all of which, I will be very happy to listen to, for I also have my own stories to tell in return. 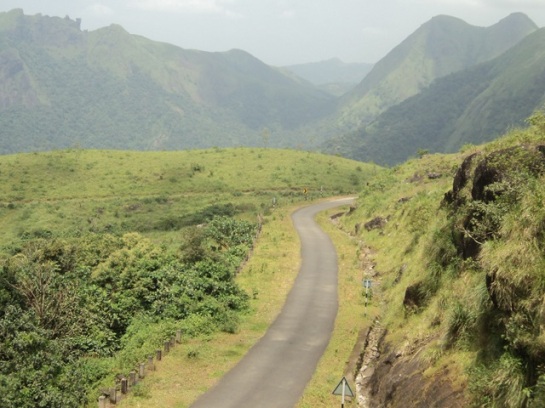 All journeys need a big turn like this one even between all the beauty.

I have hoped to be there within that dark fantasy world which I had dreamt about; I have wished to be part of that special world of the unknown which was beyond human understanding, and to be part of myth and history at the same time. There was to be those days of the darker side of mysteries which go a long way beyond our knowledge – it was to make life better for me, even without that magic and that fantasy there, but is that to happen soon? Well, we will know at some point.

I am blogging about my dreams and passions for the Club Mahindra #DreamTrails activity at BlogAdda. You can get a Club Mahindra Membership to own your holidays!

***The images used in this blog post were taken by me.