What are the usual colours that one chooses for the inside and the outside of a house? Some people keep telling us to choose the light colours and that the best colour is white. They say that everyone is choosing white or similar colours and so we should also choose the same. One of my uncles had once said “as we are part of a society and because they are choosing light shades, we should also do the same”. I immediately told him that I won’t, and that felt good. Yes, for some people, copying others is the only known thing.

Most of the houses in Kerala are defined by one thing, about how to build a house like somebody else, with a bigger size. Every day, people think about how to make huge houses which are good enough to make a lot of pre-British kings of India shocked. There are so many big houses in Kerala, which makes one wonder if they build houses to take photos and videos instead of living. Some people make houses, but do they classify as homes? Is this copying of others and showing vanity the right thing?

Well, people will continue to do the same, because some people need to waste their money and the others will also get some housing loans. Having a big car and a big house determine just too many things. So, what we can change is the colour – we can at least choose different shades from our neighbours. Let me tell you something about my neighbourhood. Almost every house around here is white, and the remaining are all having some shade of yellow. No matter whose house they are, there is no variety here at all.

Even if we look at those churches, whether it is Catholic, Orthodox or some Pentecostal church, the colour is just white outside. That actually surprises me because it is usually the tomb which is whitewashed. Whenever I see something painted white, I feel a tomb – sorry Obama, that includes White House too. There got to be changes, and each building should have its own identity. There should be something special about each home, hall or place of worship.

Among all the available colours, I will choose red, because it is the colour of blood, and has high intensity. It is easily visible and its has a certain amount of energizing power. Blue is also my favourite colour, but for my room and the other bed rooms, red looks like the best choice. It should also be the colour outside, and the best would be the brick-red colour, because it gives an even better feeling. Actually my house is already painted red, and so the same colour works very well for me.

The blue shade comes to the picture in other rooms, especially the dining room and the main hall. I was checking the colour for this particular room, and it looked very good right there. It has to be the purple variant. There is something royal about it, and most of the blue shades actually gives a certain happy feeling. It brings the blue sky and the blue ocean, keeping one close to the feeling to wander around and at the same time, be happy. May be one bed room can also have the same colour or some other shade of blue.

The red is strength while blue is peaceful inspiration for me. Actually, the #PaintFinder feature from the Bed Bath and More website allows you to choose a colour and recreate your dreams. There is also the availability of preview in a virtual room. This will be nice option which makes sure that you make the right choice with colours. Lets paint something wild with all these available options and see the preview, so that we can know what awaits us, a long time before.

Here is another flashback of my spiritual journeys that go back a few years to a season of Honda Unicorn. I have my doubts if churches can be called “cute”, but here are a few of them if they can really be called so. All of them are from Kerala, and have left a permanent mark despite their small sizes and in spite of not being that famous. This is the season of Lent, and I would consider a few more of the abodes of God can only do good. After all, I am one of those very few unlucky people who always have their birthdays during the time of Lent.

Christ Church, Munnar: Belonging to Church of South India and having a history of over one hundred years, this one goes back to the people of the tea who had arrived here in relation with the tea plantations of Munnar from Britain. The stone laid in on 11th March, 1910, this church is really well-maintained and you can have a very good view of the hilly town from here, which is beautiful, only to be challenged by the beauty of the church itself. You can see India’s colonial past and understand that this one has a lot of stories to tell.

Church of Our Lady of Hope, Vypin: Located at the island of Vypin, which forms a part and is connected to the city of Kochi by the group of Goshree bridges, this is a small church which has the lake directly in front of it, and makes a very beautiful view if you are looking from the other side of the water body. There is a lawn, a cross and a grotto in front of this white church building, and also a number of Chinese nets and some huge trees which give enough to shades to have some spiritual rest.

St. Sebastian’s Church, Thoppumpady: The new bridge which was built at Thoppumpady made sure that you can only travel to Fort Cochin and Mattanchery through the road which goes on the side of this church. This is a protected monument by the archeology department and the renovation works were delayed as it couldn’t be done without permission – it has been renovated now, and the photo that I have is from before that. Its antiquity is its beauty, and there is also the lake on the back-side with a nice view of the historical Harbour Bridge.

Holy Cross Church, Mattanchery: More of a shrine than a church, this is a pilgrimage centre with historical significance. There is the presence of a small church-like area inside it though. It tells the tale of the historic oath which was made by the members of the Saint Thomas Christian community of Kerala that they would not submit to the rising Portuguese dominance which have been trying to forcibily Latinize the local Christian community that had existed with the Indianized version even before Christianity spread through Europe. 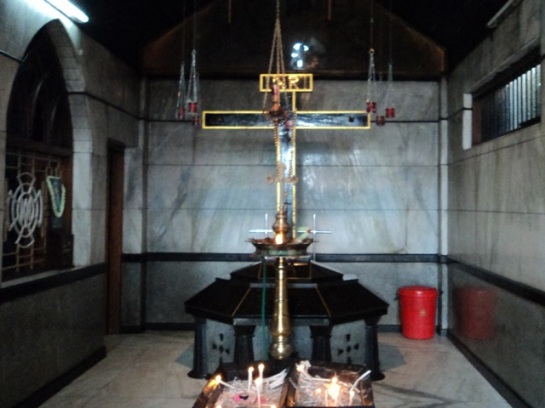 St. Mary’s Church, Njarakkal: A part and a major centre of Vypin that I had earlier mentioned, this church at Njarakkal is not that different from Church of Our Lady of Hope in its architecture, but can still claim an identity of its own. It has more space inside the structure and also has very beautiful and traditional altar. The style is just like a number of older churches built at that time and having the feeling of being very old, but the renovations have made sure that it stays beautiful and worth the admiration.

***I wish to leave the total statistics related to the number of the churches I have visited since 2009. The first one is the district-wise division, second on the list outside Kerala and third on the churches visited outside India. The only two districts missing are Kasargode and Malappuram. The districts might not be exact as I have my doubt about the borders, but the numbers are exact. *The photos used in this blog post are those taken by me on my Sony Cybershot DSC W-310 only.
(Ernakulam-174, Kottayam-69, Thrissur-39, Alappuzha-29, Pathanamthitta-17, Kollam-9, Kozhikode-7, Idukki-13, Kannur-4, Trivandrum-4, Wayanad-4, Palakkad-3)
(Tamil Nadu-59, Pondicherry-11, West Bengal-11, Karnataka-8)
(England-41, Scotland-9, Sri Lanka-8)