Even though Marimayam of Mazhavil Manorama is the better known satire on Malayalam television channels, there is another program which is aired at 10:30 PM every Saturday and Sunday, keeping a high standard for itself too. Vellanakalude Nadu, the satire shown on Asianet has its name inspired from the 1988 drama satire directed by Priyadarshan, scripted by Sreenivasan and produced by Maniyanpilla Raju. It had Mohanlal and Shobhana in the leading roles supported by a fine group of popular names of that time.

With its memorable comic scenes and its work as a political satire on the system as well as the people who were around it, the movie is often considered as a classic even though its Hindi remake Khatta Meeta with Akshay Kumar and Trisha Krishnan in the lead roles didn’t do that much. Translated as “The Land of White Elephants” with its title, this television series deals with the random situations that a common household come against, and it usually has someone from outside trying to interfere with their lives.

The last week’s episode had the protagonists, Sivadasan and Kunjumol being fooled in the name of providing visa to work in the Middle East. It is a commonly used idea, and the episode actually added an addition layer to it along with creating some more funny situations with the neighbours and the relatives. Cheating related to visa has been quite common with agents making fools of the people who are in need of an urgent job. Such characters are also common, making an appearance also in the recently released realistic flick, Pathemari. 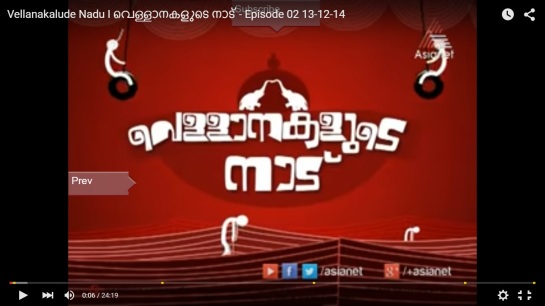 All the stories revolve around the two protagonists, and the rest of the cast actually changes their personalities. Susu is the neighbour and friend of Kunjumol, but both friends are jealous of each other. Susu’s husband is played by two actors, one playing the character called Vinod and another Jimmy. Both characters are part of the television series in one role or the other, with one who doesn’t play the husband role plays another person in the locality. Another character is Manjulan who comes up with something new every episode.

The rest of the characters include the sister and brother-in-law of Sivadasan along with two other characters from the locality. The need for them arises according to the story of the episode. There are times when the story is almost fully shot inside one house only. Sometimes there will be more focus on the different offices. The episode usually starts with Sivadasan and Kunjumol, ending it also with them, with other characters dropping in between. There have been a few exceptions about it though.

There have been a good number of interesting episodes in Vellanakalude Nadu, and almost all of them have left some nice and valuable messages on the society. There was one episode which dealt with the mobile tower related issue and another one with the phenomenon of fake certificates. The issue of companies making false promises towards its customers, was one of the best taken episodes. They could even take the common problem of alcoholism and bring the message in a very interesting way.

The advantage of this program is that the cast is not just very good, but they are also a lot suitable for the characters which they play here. The earlier episodes were different though, set more in the offices than anywhere else in the Marimayam style, and the characters were also somewhat different, even with the core remaining the same. The change of the focus to houses instead of the offices has helped the program to bring an identity of its own, different from Marimayam, and it has been a good positive thing which will make sure that the program does better!

***The image used in this blog post is a screenshot of the first screen of a video shared by Asianet.

One thought on “Satire of White Elephants”