***Kitty Newspaper from the Cat World lead by Simona the little big cat.

Why don’t you give it a try? asks Simona.
After the recent talks about banning Tuna in the cat world in favour of Mackerel, Sardine and Herring, Simona has dared the cat community to do that and suffer the consequences. She has also told the press that this ban is because the name of the cat leader’s former girlfriend was Tina, and not because there is a special love to see more Tuna living in water. Simona was also heard saying that nobody has the right to choose what others eat, and all these decisions for saving Tuna from getting eaten in also with political motives to support those who sells the other types of fish. She has also made it clear that she will always find Tuna and eat it.

Simona valiantly shows her tongue in defiance of the latest food ban.

Simona works part-time to explain dreams.
As a lot of cats have been experiencing interesting dreams in the recent past, Simona has decided to work part-time, explaining them. She addressed the worried local cat community last day and has assured them that this doesn’t mean the end of the world. She also offered them to explain the dream with one chicken leg taken for the interpretation of each dream. She has promised to continue the job until her stomach is full, and then there will be a break. Those who bring fish along with chicken will have the extra interpretation which is related to the dream that is to be seen on the next day, according to her.

Simona asks for votes in the “cool cat competition”.
In one of those competitions held by the Feline Brotherhood of the South-West Canal, Simona starts at number twenty nine out of one hundred and seventy five entrants. She has asked for each human to vote for her by hugging a cat which looks like her, as one hug is equal to one like on Facebook for her as cats are not on Facebook. She has also asked to feed a cat coloured black and white, and the action will also be counted as one share on Facebook. Simona says that she doesn’t really need this label because she is already the coolest cat around, but she wishes to add it to her resume.

The work on The Great Feline Epic begins.
The cat intellectuals have begun the work on what is supposed to be the greatest epic from the cat world, which is called The Great Feline Epic or the Legend of Cats in Black and White. With one hundred cats working together to achieve on grand aim, the representatives of the movement have told the press that the work will finish in less than a year, just before the building of the Great Feline Statue of Freedom finishes. More cat intellectuals are supposed to join the team from different countries. The work is supposed to be honoured as the one true book of cat myths and adventures.

Simona publishes the new “Wanted” list.
Simona the Kitty, with approval from the Universal Cat Sorority Mission, has published an update to the current “Wanted” List which had only four dogs until then. The extention to the list became a need after Simona failed to catch two cockroaches which successfully evaded her. Simona called for support among the cat team, and after bribing with some extra tuna, successfully managed to get the support of more than half of the members, and has declared the two cocroaches as wanted for treachery. She made it clear that cockroaches are not supposed to escape from cats certified with the titles of Spider Slayers. She has also accused the neighbourhood dog of aiding cockroaches. 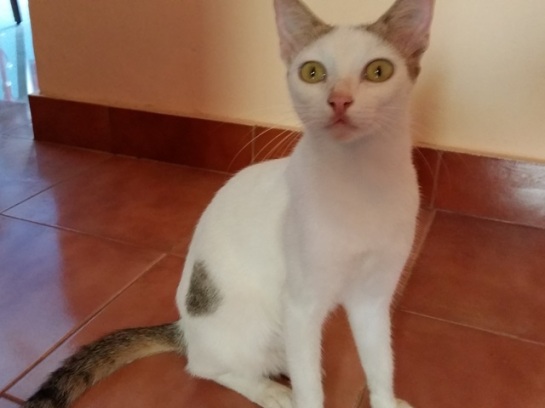 Simona was shocked to see the last cockroach escape from her.

Simona calls herself the future of cricket.
After practicing every day with the ping-pong ball, Simona has called herself the future of Cat Cricket. She proclaimed herself the captain ultra-cool and has brought the idea to bring a new Cat Cricket Team for India. “We can always do better than the current Indian cricket team” she said. “They waste their talents, but we work hard because we are cats and there is nothing much to do for us. We have survived the deadliest dogs which wander around the streets and the most evil humans. This will be very easy for us. We shall defeat everyone because we know the secret cricket ingredients” Simona was further heard saying.

Simona does a hunger strike in style.
To make sure that all cats get to live under a roof, Simona started a hunger strike. She has claimed that this “nirahara sathyagraha” has worked and did provide home for twelve more cats before she called it off. But the dogs lead by Simona’s neighbourhood dog Jimmy has claimed that this is pure nonsense. “We have seen her hunger strike. It lasted for only four minutes and fifty seven seconds. What kind of impossible result is achieved with that? This makes no sense, and we demand a probe into this claim” Jimmy was heard commenting. Meanwhile, Simona has said that she does the impossible, and it has become natural to her.

***The images used in this blog post were taken by me on Samsung Galaxy A5.