***Kitty Newspaper from the Cat World lead by Simona the little big cat.

Simona calls for cat participation in Badminton.
On one of those joint session among cats, dogs and humans, Simona said that she had enough of this discrimination. Humans play Badminton and dogs get to retreive the shuttle. She demanded that the cats be allowed to keep the shuttle, and it is how they can also participate in this game. She also showed proof that Badminton had its real origins in 2322 BC when a villager saw two cats playing with a dead mouse. “But it was soon forgotten because humans are good at pretending that they don’t remember”, she said. “After all, only what the rich do will get all the attention” she further complained. The dogs have decided to support this under condition that they get the right to fetch everything during all games. 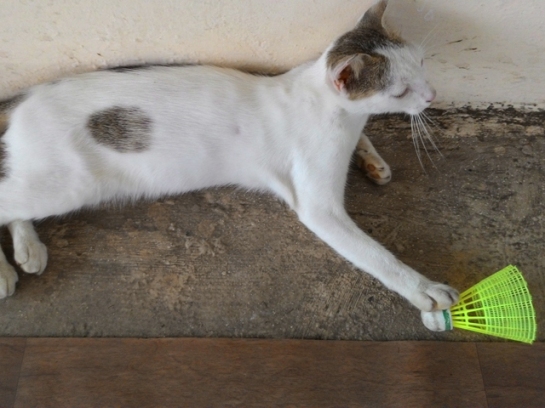 I declare this as my property. Nobody touches this except me 😀

Local cats file complaint about the black dog.
“What is wrong with that dog?” a lot of cats have asked the same question. The big black dog which chases everything has become a big nuisance not only for the cats, but also for the humans. The cats say that the dog even chases other dogs and needs to be dealt with. They have also asked for installing security cameras on the road side to make sure that they all get to know the right dog and bring it before the law. Secret cat squads have been assigned the task of saving others from this mystery dog about which nobody knows anything. There are already talks about it being a dangerous hellhound coming from the underworld, but the cat intellectuals have denied it completely.

Let the sleeping cats rest, says Simona.
Simona told the press about how annoying some of the humans are, with no concern for the others. When the cats only sleep about twenty hours a day, humans are wandering around everywhere disturbing the highly intellectual sleeping procedure that the cats follow. “What is it with these humans? Why do they put the music in high volume and disturb even the people living at the nearby houses?” she asked. She also told the press that the humans haven’t been getting any better. But cats have always protected the humans from the evil forces from the other dimensions, she asserted. “The protection from the mice is just one of the things that we do” she said.

Cats go crazy over Catwoman choices.
Uknown sources report a series of fights among the cats over who the better Catwoman is. Michelle Pfeiffer, Halle Berry and Anne Hathaway were the choices, as some of the cats were seen fighting last on the sunshade of an abandoned house. But this report was declared rubbish by Simona who made it clear that cats don’t need a Catwoman to show that they are awesome, even though they appreciated the fact that they also get the equal treatment when little insects like spiders and ants got their own superheroes too. Simona has also said that she is ready to play the role of Catwoman if the situation demanded. She did suggest that Womancat was a better title too.

Cat transport should develop more, adds Simona.
During the press conference about the sleeping cats, Simona also asserted that the necessary steps should be taken to make sure that the feline gets the advantanges of good transportation facilities. Nowadays, cats have developed into a superior species and they will requre a lot of traveling to display their skills. But due to the heavy traffic on the roads, and some hostile humans, it has been too difficult. She has asked the Ministry of Road Transport and Highways to provide the cats with a separate route or free travel in at least few of the cars, buses and trucks on the top. The betterment of the cat citizens meant the development of the nation as a whole, she said.

Start the car, my dear human. Lets go and have some fish for lunch 😉

Ban Cats and Dogs; Team Cat Power asks.
The new radical kittenist group, Team Cat Power asks for banning both Cats and Dogs and its sequel Cats and Dogs: The Revenge of Kitty Galore because both of them shows cats in a bad light, and hails dogs as heroes. The group has send a message to the humans that they will know the value of cats after being bitten by stray dogs. “The negative reviews for the sequel was just the beginning of the end for such discrimination, and we are thankful to the human reviewers who voted agains that movie” the leader of the group added. But they have not backed away from the protests, and are planning to do strike on the sunshades of random houses.

Is the Cheshire Cat Day a possibility?
26th November was the day on which Alice in Wonderland was published by the English writer Charles Dodgson under the pseudonym Lewis Carroll. But the cats basically know only one person from that novel because they have never cared about the other characters in the work. The big grin has been considered as a classic moment and something of great glory for the cats all around the globe. So, the cats are busy campaigning for this big day to be declared as the official Cheshire Cat Day in honour of the greatest cat character in the history of literature as they see it. They have often compared Cheshire Cat to the status of something similar to Dracula among vampires.