There was a time when I was depressed about how the vampire movies were being made. Byzantium was a relief in that case, and before that movie, there was another flick which brought a certain relief, but it was even more unknown and didn’t do much at the box-office either. It was not that well-received because people were really not expecting this kind of a vampire movie, which they will consider not their kind of entertainment and also not the kind of horror that they want.

Well, the situation was more about making a choice. But it also meant that another vampire movie which had the true essence had to go down. It is never a good sign for a true vampire lover who wishes to keep the vampire essence closer to the vampires rather than mixing or bringing it to the human side so much that it makes one wonder if the resultant creature is a human in a vampire disguise. So, it is once again up-to us to bring such lesser known movies further attention.

Based on the novel Let the Right One In by John Ajvide Lindqvist and also coming after a Swedish movie of the same name had already released, this one has a lesser reception. Let Me In has managed good critical reception though, even as most of the people who have watched the Swedish original are stubborn and not ready to watch or accept this because they were too attached to that one. You don’t usually see this much critically appreciated movies in the horror genre, and Let Me In is not just about horror.

Chloë Grace Moretz is the future: She has been amazing.

Owen (Kodi Smit-McPhee), a boy neglected by his parents and bullied by other students at school, has a girl called Abby (Chloë Grace Moretz) arriving to live next door with her father Thomas (Richard Jenkins). She is pale, acts strange, has no friends and wishes to have no acquaintances outside what seems to be her small world of two. Still, the boy and girl soon become good friends, but it turns out that the latter is not what she is actually believed to be. There are mysterious deaths happening in the neighborhood, and soon, it is the father who goes missing.

Bullying is a central point in this movie and the movie speaks against it. It is the major factor on which the protagonist’s life is developed, as he remains hopeless, and feeling eternally weak before the bullying students until he meets the girl, his first real friend and a strange source of power. The relationship between the two develops slowly, but beautifully, without any exaggerated additions. She is the strength that he has longed for, and as the movie reaches the end, the two are good enough to compliment each other, as he finds the strength to resist the bullies. 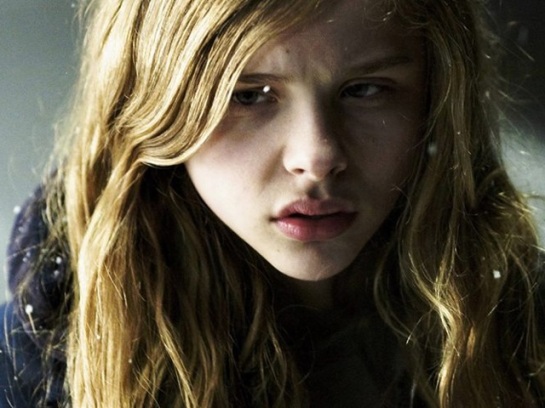 The vampire’s need for blood and their hidden lifestyle is shown without the style and glorification that it had with some of the movies of the time. There is nothing that much of beautiful about it here with being the creature of the night. There is not even the strange mystery which is often equated with beauty. Things are rather clear here. It is not that interesting being the immortal vampire. The need for blood is beyond control and the requirement of hiding is so much. There is no usual kind of entertainment, but there is the skill of story-telling and the strength of strong emotions in display here.

The kids are too good in this movie; there is not much about the adult characters here though. Chloë Grace Moretz and Kodi Smit-McPhee come up with incredibly mature performances. The former adds a very significant strength to the adaptation, as she works through her vampire-self with elegance in this movie. She adds her own charm to the character, and once again proves herself as the future of the movie world. You will surely need to watch Let Me In, and may be the Swedish version, Let the Right One In depending on which one you get. Here is another #UnknownMasterpiece.