I have known only a few people during my early days of WordPress blogging, and even on the day of the third anniversary of Travel Diaries and the first of Movies of the Soul, I had only two as friends. For most of my blogging time, I have had only two people on my friends list in the social networking sites, and the second blogger to be my friends list was Maniparna. I have been reading her posts since early 2014, during those days when she had another theme and a pet blog dog called Gulgul 😀

I have been thinking about getting a pet for a long time, and then I noticed the blog pet – it caught my attention first; then everything else; not many people got a blog pet, and I have seen nobody else with one. That was my strange reason at that time, but there has been a long list of book reviews and haiku which I continued to read as her Scattered Thoughts went on to become one of the very first blogs which I read consistently.

Along with those writing skills, there is also something about her photography that you need to look out for. Even though I have never really tried to write haiku or book reviews with the inspiration from her blog, I have always been inspired by her fiction, and more than that, her supportive comments on my two blogs, Movies of the Soul and The Tea Cerebration(s) . She has more than one hundred and fifty comments on my blog, more than anybody else. 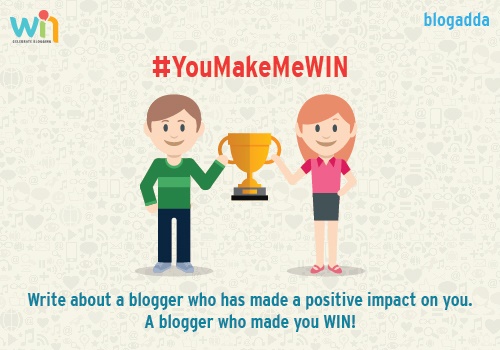 She has commented more than one hundred times on this blog alone, more than double of those who comes second and third, and she has done that so consistently – now that is inspiration to come up with more and more posts. She was also helpful in helping my early doubts with the blogging sites. I have been a very doubtful person in the earlier blogging days, especially when related to BlogAdda and IndiBlogger.

She was also the first one to follow me on Twitter and also the one before everybody else to favourite on of my tweets. Yes, Twitter came very late for me, and my social networking idea was limited to Facebook and Orkut earlier – so needed some help with making an entrance into the world of tweeting. We have also been the runners-up of the Godrej Aer Pan India Blogging Contest, and that was the first contest which I had ever had won any prize for.

She has a long list of contest wins and runner-up trophies as you can see on her blog. For people like me who have a slow internet, her blog is also one of the fastest to load. Her work has inspired me for the last one year and a few months; she deserves to be nominated at WIN 15 and I don’t really need to hope that she nominates her blog in any of those categories there because I know that she already did that and also got her badge 😀 Here is one my favourite Haiku works at her place.

Uncle Dracula has said a quote about immortality which I shall not bring to anybody’s attention. Still, a few things are forever, and even though I shall attribute immortality more to the Team Vampire, there is nothing like a Haiku on a beautiful monsoon day with rain drops creating poetry. Long Live the Haiku Queen! Here is a tribute to the inspirational blogger, and Queen of Haiku! #YouMakeMeWIN

I’m blogging for #YouMakeMeWIN to honour a blogger who has influenced me and deserves to be nominated at WIN15.

*The Vampire Bat and the Vampire Owl sends their regards 😀

***The image used in this blog post is also taken from the WIN15 activity from BlogAdda.