February 28th is the celebration of the three month anniversary of finding Simona the Kitty. It would be another day of awesome tea party. I feel that the cats should celebrate birthdays every month as they are with us for such shorter time. Reaching home on the day of the release of the Malayalam movie Angels, Simona the Valiant Cat plays many roles here at her home, and lets see what her major programs are, on these days.

1. The Leg Hugger: Simona is a consistent leg hugger. It is almost impossible to avoid getting hugged by her. She will hide under the bed, table or even at a place with the lowest possibilities to hug your leg with a quick pounce and surprise. Yes, it is not permanent. She takes breaks between each hugs, and sometimes the procedure is very long, as she stays on the leg trying to give a leg shake. May be she actually wants to hug a tree, but there is none indoors. 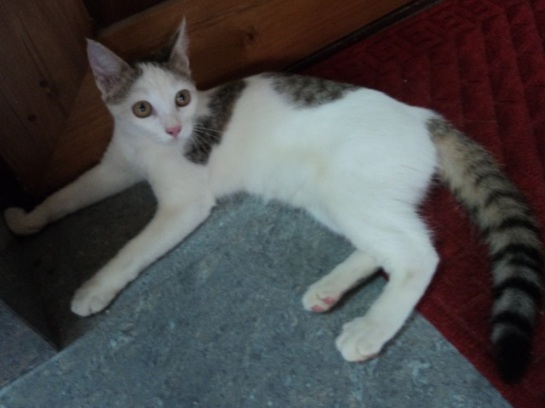 So you know I hug legs. I am so cute, so give me your leg or I shall take it 😛

2. The Ball Finder: You can’t hide the ping-pong ball from her; you can only keep trying. She will find it and she will start kicking it, unless you keep it very high or lock it. She is becoming more and more fond of the orange colour and her football skills with the ping-pong ball might give her a chance in a possible future Kitty ISL. May be when you name her after an awesome tennis player, you have to expect something like that 😀

I can find anything. No matter what you do to hide, I shall find all the treasures 😀

3. The Spider Slayer: She punches the spiders whenever she finds them. It is a left right left punch which she has mastered. I am hoping for that to be added to the next video game of Mortal Kombat. Last time, she tried that with a cockroach, I had to throw the Cambridge Advanced Learner’s Dictionary on it to finally finish it off, but she is making a good attempt despite having a basic non-violent nature 😛

The hunter is ready here. Do show me all spiders, lizards and cockroaches.

4. The Wire Puller: She just can’t stand those snake-like creatures called wires. She finds her mortal enemy there and bring all of them down. So, let your mobile charger cable come down even a little. There is a mighty hunter down there looking for some snake dance. No matter where she finds it or of what kind, she can hunt it down. It is a special skill that she has acquired.

This is my personal mobile charger. Find another one for yourself, human.

5. The Lap Jumper: You are watching the Malayalam version of Who Wants to be a Millionaire or Kaun Banega Crorepathi and then she jumps on your lap and watches the television. She would sit there as Queen Simona. I don’t think that Suresh Gopi or Amitabh Bachchan would mind that though. She would wait there until enough massage is received or watching the television won’t be very easy 😀

At the same time, the lady whose name our kitty has borrowed, Simona Halep also becomes the first woman player to win two big tennis tournaments this year with the recently concluded Dubai Open. She regains the world no.3 and looks good to go further. As the last year’s finalist in this clay’s own slam, I hope that she improves on that and wins the French Open this time.

12 thoughts on “The Simona Programme”